The 53rd annual Colorado Business Economic Outlook has just been published. This massive document (140 pages) is essentially a forecast. Researchers at the Leeds School of Business at the University of Colorado spearheaded an analysis that looks at changes in all economic sectors in 2017 and looks at the opportunities and challenges that will shape population, employment, and the overall economy in the coming year. Here are some of the findings and predictions that stood out for me:

In July 2016, Colorado’s population was estimated at 5.5 million. This represented an increase of 90,125 from the previous year. While a third of that increase was attributable to “natural increase” (births minus deaths), two thirds was from “net migration.” In other words, two thirds of the state’s growth was due to people moving here from elsewhere. [Interesting side note: while it may feel like Colorado has more people moving in than any other state, Florida actually ranks first, with 325,000 net immigrants.] 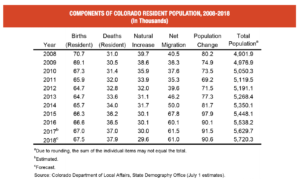 Housing starts are expected to continue improving at a modest rate, surpassing 1.2 million in 2017 and 1.3 million in 2018. This could be derailed if mortgage rates rise faster than consumers are comfortable.

At the time the report was prepared, Colorado was expected to finish 2017 with 23,700 permits for new single-family detached homes, a 9.8% increase for the year. Continued growth in 2018 is forecasted to result in another 9.7% increase, to 26,000 single-family permits. As for multifamily housing, since 2010, an average of 96% of multifamily permits in the state have occurred in the corridor between Colorado Springs and Fort Collins. Apartment construction has been strong in that time period, compensating for low levels of single-family construction and fulfilling the demand for households that are unable to meet the financial and credit requirements to purchase a home. Regional demand and consumer preferences will continue to dictate the type of additions to the housing stock.

If You’re Thinking of Leaving

I’ve seen an increase in the number of people saying they want to leave Colorado. If you’re in that group, you may want to check out www.savetaxesbymoving.com. It has a handy calculator tool you can use to project what you might save (or not) in taxes by moving from one area of the country to another. Input your current location, desired location, tax filing status, age, number of dependents, and current gross income. For those with more complex tax situations, there are advanced options where you can input your annual interest income, annual dividend income, annual long term capital gains income, and total itemized deductions.

If you’re staying in Colorado and want to buy or sell, or if you’re looking to leave and want to sell, I stand ready to help! Contact me at jensellsco@comcast.net or by phone at 303-204-6494.